MJ is back up and running and hoping her mojo kicks into full swing this week for you all..lol xx

It’s a very exciting week with Tonic Studios launching new layering dies (on Create and Craft on Thursday 19th March as a One Day Wonder event) and three gorgeous new strip dies….something a little different in this bundle!  You’ll see as the week progresses as MJ shows you her projects using them.

The first projects, and it’s a wee sneak peek, MJ has used the Star Layering Die Set.  She has so many ideas (and when doesn’t she) on how to use these!  I’m sure you’ll see these pop up time after time.

MJ cut six 6” x 6” squares of coloured card and one 6 1/2” square.  Starting with the largest star die she placed it into the centre of the square to create an aperture.  Using this first cut piece as a guide to centre the next size down she continued to cut each of the smaller squares.  Then she glued these layers together and then cut the smallest star into the 6 1/2” piece of card and glued all pieces to card blank.

To finish the card MJ cut a sentiment out and the word ‘son’, some extra small stars and added Crystal drops. 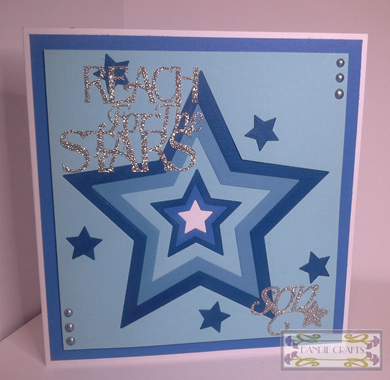 MJ wanted to create a card for a teenage (or inbetweenager!) and thought the stars would be great for this.  She used the stars that were cut from the first project and ran them through various embossing folders.  No waste!

MJ has stated with a 7” x 7” card blank. She then stamped a piece of red card cut at 6 1/2” x 6 1/2” and added to card front.  The image is from Indigoblu’s new range of stamps designed by Kay Halliwell-Sutton which was coloured using alcohol pens.

The stars were attached across front of card and the word ‘daughter’ was cut twice and offset to give shadow effect..  MJ used 3D foam to adhere the word and the stamped image.  To finish she added some pearls. 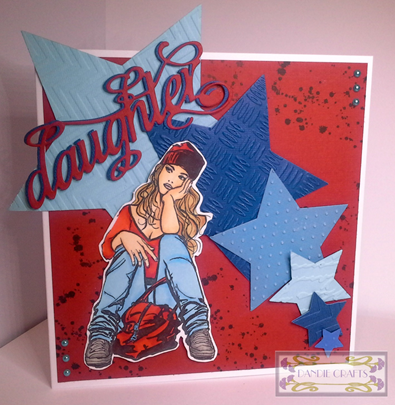 Please tune in to Create and Craft TV on Thursday 19th March for lots of inspiration, hints and tips with the lovely Jo Austin.