Today Mandy-Jane wanted to play with a Tonic Studios die set.  It’s one of those that she had her eye on but wasn’t sure about until tonight!  She had a bird in mind and wanted to build a simple design around this theme.  So she thought long and hard (and it was a painful episode…lol) and 5 minutes later decided to go with a Peacock as this seems very popular at the moment. 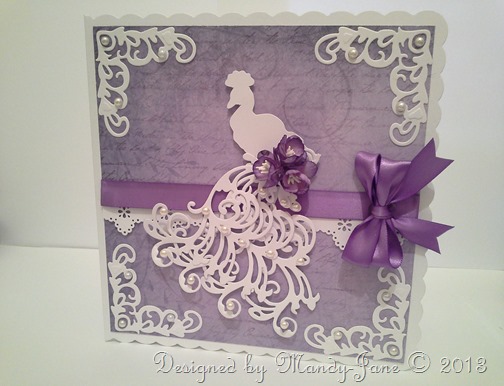 Once again MJ scrambled through her paper stash (even after a recent almighty clear out she still has quite a stash of the 'stroking’ and not using kinds!) she found a piece of 12” x 12” scrapbook paper from a Heartfelt Creations pad that was released earlier this year.

MJ used Tonic Studio’s Fanciful Flourish die set.  She cut out the largest of the designs and the corner 4 times each.  She then used her Silhouette Cameo and an old SVG cut file of a peacock (she had to cut it off in it’s prime and remove it’s fan).  She used the largest die cuts and glued them to the peacock shape to form it’s new plumes.  She covered the joins with paper roses in toning colours. And voila – a peacock!

Thanks for Popping By